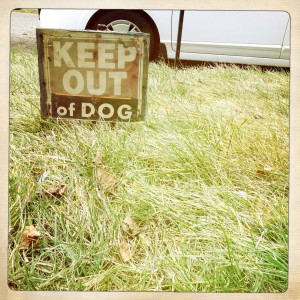 It’s the thought that counts.

I recognized his hat first, and then the rest of him fell into place. He was picking his way through the stopped cars. If I hurried I could catch him on the other side and say hello. I passed behind one stopped car and stared at a slowing car until it stopped. I watched my friend’s hat as he reached the curb ahead of me.

I was almost close enough to call, but on Lawrence Avenue distances feel farther apart. This is not a friendly street. A friend who moved to LA and hated it used to explain his distaste by saying, “It feels like the corner of Lawrence and Kedzie in the middle of summer, every single day.” You’re always behind the wrong car and no one will let you change lanes.

I got across the street and my pal was looking around. He looked north up the block, and west across Western. I was about to call, but suddenly he looked like a complete stranger. Just a tall man in an odd hat, choosing his next move. To wait for the bus or hail a cab? To stop at the bank or make a detour for groceries?

This is the intersection where the pigeon man used to hang out. He’d sit on a fire hydrant and pigeons would roost on his shoulders, his knees, his head. Sometimes he’d hold his arms out wide and they’d perch all the way to his hands. I didn’t think much about him when he was there; he was just part of Lawrence Avenue, staunch and grimy. Then he was hit by a van and killed, and the pigeons lost their defender. I wonder what they thought the first day he didn’t come with bread and shoulders, and then the second and third day. Now they stay mostly under the el platform, half a block south.

My pal turned toward Western and paused. I suddenly didn’t want to call him. He might be in a hurry, and I only had a few minutes on my meter. I went into Walgreens to find toothpaste and toothbrushes and read through Valentines Day cards for the least worst one. I wondered if I’d have time to stop at The Chopping Block and find a new saucepan. When I came out my pal was gone—or I suppose he was. I had forgotten all about him, like I was never there.