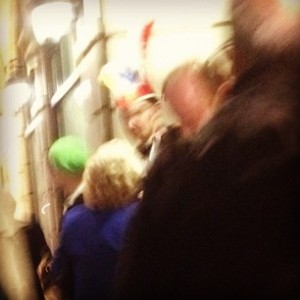 What’s not to believe?

I got an email inviting me to audition for a show filled with lies. For the audition, I have to tell a three-minute lie, as outrageous as I like. How hard can that be? So I accepted and figured something would come to me. But now the audition is just days away and I’m starting to panic.

I’ve come up with two so far, one about a friend’s strange restaurant behavior and one about accidentally killing my piano teacher. Both sound good in my head, but when I start telling them out loud, I trail off. I lose my sense of purpose, which at least tells me something about why I like true stories, even when they’re not outrageous. They’re true, so they reveal something about something, even if I don’t always know exactly what the something is. But what does lying reveal? So far, I’ve lied only to hide things. But then again, a lie is just a fictional story and I’ve written those, so this shouldn’t be any different. But it is. I’m thinking about cancelling my audition, but I don’t want to chicken out.

Last night my brother Rolando came over. His friends have opened a hardware store, Matty K’s, and we were going there for a sort of gardening pep rally. Rolando came early to bring us gifts of dog food. Their dear old family dog passed away last month, so they had boxes of treats and bags of food which I coveted. My plan was to pass it on to Zoe’s new owner, because the Katharine Hepburn of Horner Park has also passed on, and Zoe was now living with one of the B’s.

There are two B’s, B-e and B-y. For months we’ve emailed each other to schedule Zoe’s walks. We’ve also tried to plan a dinner together, because the Hepburn sisters gave us checks to dine at Blackbird, as a Zoe thank you. We’ve tossed dates around and B-e even made reservations twice, but something always comes up. Yet when Miss Hepburn died, we found ourselves suddenly able to wrangle ourselves and husbands and bottles of beer and whisky for pizza at a local BYOB. It was soon enough after Miss Hepburn’s death that it didn’t feel real, and we had a boisterous time.

I planned to email B-e and tell her I had food to pass on for Zoe – it’s even her brand – but B-e had already emailed to say she’d brought Zoe back to live with Miss Hepburn’s sister. She convinced her that we didn’t mind continuing the walks, and Zoe is good company and good protection. So in a little while I’ll go over and pick her up for a walk. But first, I need my lie.

Last night, after Rolando parked the car and we had dinner, we walked over to Matty K’s. We passed a man dressed in a plumed page’s costume. He looked exactly like a royal chicken, with a plumed headpiece and puffy satin middle and tights. I wished I had my phone out, but he didn’t look like he would appreciate a picture. He was smoking a cigarette and adjusting his headpiece. We continued on to the store, where we had cookies and root beer and got fired up about gardening.

When we left, the royal chicken was still standing on Western, greeting people going into an event. If this were a lie, something outrageous would happen right here. But because it’s true, all I have is a blurry picture, because I grabbed my phone in time but didn’t stop to focus because I was afraid of getting yelled at. I don’t know if I’m cut out for lying, if I don’t even have the nerve to get a decent picture of an outrageous apparition placed right in my path like a golden egg.