I went to get my hair cut. While my color was setting I looked at some magazines. I read about People’s Most Beautiful and looked at pictures of Scarlett Johansson and Mark Ruffalo in Vogue or maybe it was Vanity Fair. And I thought about Sherry, the second wife in a play I’m working on, and wondered if she hates her husband’s first son because he reminds her how beautiful the first wife was.

How hard it must be to feel ugly in a world where beauty is pictured all around you. I think this Sherry character feels ugly. I see her surrounded by nail salons, tanning salons, walk-in spas, women’s magazines, hundreds of headlines about best-ever sex and perfect skin now and fashion must-haves for the coming season. How do you combat that?

While my stylist was chopping off all the hair I’d been carefully growing out for months, another stylist put down a magazine and said, “I cannot believe Kim Kardashian is having another baby shower. Didn’t she already have one?”

“I am very careful not to know anything about Kim Kardashian,” replied my stylist.

“I know, but isn’t the custom like, you have one and that’s it? Having another one is so tacky.”

“I don’t know anything about her,” said my stylist in her calm, steady voice.

“Me neither, but they are everywhere. I hate the Kardashians.”

“I ignore them completely,” said my stylist.

I considered asking, “How can you simultaneously ignore them and know when one of them is having a baby shower?” But that’s the thing about salons. The magazines are everywhere. There’s no getting away from gorgeous women. If they weren’t stacked on every side table, convenient to every fingertip, displaying the latest in hair and makeup and health and celebrities and relationships and fashion, I’d feel shortchanged. I choose the first magazine carefully, page through it rapidly, and then choose the next not quite as carefully. They begin to run together, but I need to get through as many as possible.

It reminds me of being at Urhausen the other day with Syd. It was the largest single greenhouse I’ve ever been in, rows and rows of flowers, literally—well not literally, even David Sedaris isn’t safe these days—almost literally, as far as the eye could see. I had to walk it twice before I could even begin to think about what I wanted to buy. Okay, not exactly twice. I walked it once and then started again, and then got a cart and started again. Does that count as twice?

The abundance of flowers was mesmerizing. Row upon row of zinnias and begonias and petunias and snapdragons and vinca and phlox and delphinium. I saw a man in the distance, watering things. On my second pass through I came across him and a younger man, setting up hoses at one of the million (I exaggerate) rows of flowers, each in its own long bay, with just enough room for a person and a cart in between. Many in the further bays, like the ones pictured, weren’t for sale yet. I guess they were still growing, or still in reserve. It was sobering, to see how systematically these huge flats of blooms are started and tended. I tried to meet the eye of the older man, first to smile sycophantically and tell him how beautiful everything was, and then to get to my point, finding out whether they carry lilac bushes, but he didn’t meet my eye. He was all business, and his business apparently was to tend the fledgling flowers. Like so many beautiful perfect women in magazines, the flowers were unique and fresh and yet strangely uniform.

It turned out to be a good thing I didn’t find a lilac bush at Urhausen, because my stylist recommended that I don’t buy just any lilac bush. She recommended a Miss Kim.  “They don’t get leggy like a lot of lilacs, and the blooms are very dense,” she said as she snipped away.

“Me too,” she said. “Like an Asian Southern belle.” Not too leggy, deliriously scented, mint julip with a lychee twist. Top that, Kim Kardashian. 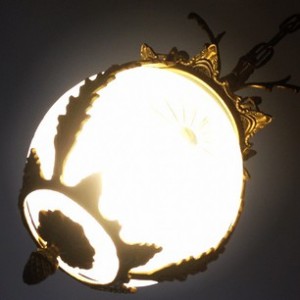 I don’t think people should subscribe to the same magazine two years in a row. If I were queen of the world, this would be one of my rules. If you subscribed to The Sun last year, try Runner’s World or Archaeology Today or OK! The One the Stars Trust. If you read Newsweek last year, you must switch to The Economist, or Saveur or Jane.

And no snide remarks about how they’re all the same. If they are, then you don’t have anything to complain about, do you? And if you live by my rules, I can guarantee that two years in a row, you won’t have to read yet another world-wearier-than-you account of how the narrator barely survived another round of oblivious friends, lovers, or coworkers only to find enlightenment in the fall of a leaf or the laughter of a small barista. Pretty sure. As queen, I will guarantee it.