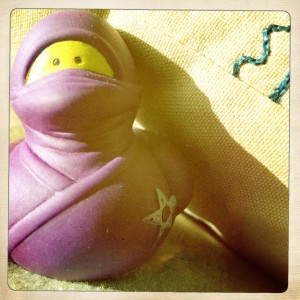 Don’t look a gift ducky in the mouth.

I can’t believe how personal the Web can seem, how informal the forms used by the designers can feel. I got a Year in Blogging report from WordPress, which of course is automatically generated, but it reads like a friend’s birthday card.

Instead of a chart, which is what I expected, there are comments. “In 2011 there were 81 new posts, not bad for the first year!” Of my top 5 commenters it suggests, “Perhaps you could follow their blog or send them a thank you note?” It’s so charming and chatty that it feels – well, either more fake or less fake. Which is how so many things can feel, from the waiter who tells me his name to Yelp displaying “Howdy, MT!” when I log in. Not that I want it to be more formal. I like cozy, but still, it’s like getting comfy on a moving sidewalk. I can get bumped off at any moment.

I just got an invite to the 25th anniversary of the Annoyance, from someone who clearly doesn’t know my history of shame with that institution, or doesn’t care, or simply sent an automated invite to everyone on her facebook list. There’s friendly intent behind it, but it’s general rather than specific.

An old friend, also from the Annoyance, used to say she believed in taking people at their word. Instead of trying to figure out if someone’s lying or stretching the truth or speaking from one agenda or another when they tell you “You’re beautiful” or “I’ve missed you” or “I totally forgot,” just take them at face value. Not because she had suddenly become more trusting, but because she believed that in the end, the truth will always out. Speaking your truth and assuming that everyone around you is doing the same allows you to live more simply right now. You will still be deceived, and you will still feel the rug slip from under you when you’re undeceived, but you’ll be spared the hassle of all that guesswork. So it’s a timesaver.

That’s a convenient attitude for the internet. For the new best friend society. It’s easier to just believe in it, and is there anything bad that can come from it? Or rather, can anything worse come from believing than from not believing?