If this doesn’t sound like a challenge, you are probably awesome. Probably you travel a lot, or spend your evenings creating art. Maybe you work out or play board games or engage in small home improvement projects after dinner. In any case, for you the couch is not a symbol of exhaustion, defeat, or your mother’s projected self-image. Read no further, you’ll have no idea what I’m talking about.

Everyone else, consider joining me.

For fellow Midwesterners, this is an extra-ambitious week in which to launch a challenge. It’s  the week of -50 windchill Wednesday. It’s also the week of January-into-February, the two top contenders for most depressing month of the year (though I’d still argue for March).

And it’s the week of a friend’s first divorce mediation, so I’m watching someone I love finally come to terms with their worst mistakes after it’s too late to fix them. If you’ve been here, you know that witnessing that kind of pain requires either extreme detachment or full-time care,  and I have neither. Watching him deteriorating while he simultaneously grows more compassionate and appreciative is messing with me in a way I can handle only by burrowing on the couch and watching The Durrells in Corfu.

But this is the week I’ve chosen. Or rather, this is the day I woke up thinking about a week off the couch. So here we go.

Here are the rules.

Doesn’t mean you can’t watch TV, or read, or nap, or burrow. Just don’t do any of that on the couch.

It’s not like I’m expecting life to suddenly become easier or more amazing, but I am curious to see what might happen. If you decide to join this challenge, I’d be curious to hear about your experience. And also, what makes it hard or easy for you to stay off that big piece of furniture this week.

When we bought our 2010 Volkswagen Jetta Sportwagen TDI, our fond hope was that we would have it for at least ten years. That’s one of the great things about diesel engines, Dave told me after much research. They can go forever. And a diesel that was also clean-burning? At last, technology and principles aligning! Then some stuff happened.

I brought home new coffee from the co-op. I cut open the top, hoping it would smell like Peet’s. It smelled good, but not as good as Peet’s.

“This smells good,” I said, shoving the bag at Dave and hoping he would say it smelled as good as Peet’s.

“Mm,” he nodded appreciatively. “But not as good as Peet’s.”

“Nothing smells as good as Peet’s,” I allowed, tossing the fair trade, people-supported, beautifully-designed packaging, perfectly good-smelling co-op coffee under the bus.

BUT THAT’S NOT HOW THE VOLKSWAGON SCANDAL HAS CHANGED ME. NO. IT’S WORSE.

“They all have it…” I added, looking for the right sweetness identifier.

“…But I can tell them all apart,” Dave clarified.

“Me too! I would totally know if I was drinking Major Dickasons versus Garuda,” I claimed, though secretly I wondered, would I?

NO, THAT’S NOT IT EITHER. IT’S DEEPER AND MORE INSIDIOUS.

“Each Peet’s blend is distinct, but they that all have that…” Dave paused.

It was a quiet, blissful moment that would have been otherwise unremarkable…

EXCEPT FOR WHAT HAPPENED NEXT.

“We need to either get to Peet’s or go back to the subscription service, though it feels too expensive,” was what I was about to say.

BUT SUDDENLY AN IMAGE CAME INTO MY HEAD.

At the Peet’s coffee factory, during the roasting process, workers pour the requisite amount of the synthetic extract “Peets No. 7” into the vat. This chemical cocktail was developed after much market research and consultation with a French aroma company operating out of a shell corporation in China. They’ve calculated exactly how much Peets No. 7 must be added to each batch to create the proprietary brand nose-feel experience while maximizing ROI. Too much and people will suspect foul play. Too little and they won’t find it compelling–they’ll abandon Peet’s for the stuff at the Co-op. Or Folgers. Or maybe Peet’s IS Folgers with Peet’s No. 7 added. HOW DEEP DOES THIS GO?

Old, pre-Volkswagen me would scoff.

Of course Peet’s is different, the coffee itself is better, Peet’s started in Oregon and everyone is pure there. They just wouldn’t DO that.

New, post-Volkswagen me isn’t even shocked.

I just nod dismissively, “Yeah, they probably would,” and pour the co-op coffee into the canister with the rest of the Peet’s because why bother.

Sometimes I look at people who listen to vinyl and I’m jealous. I roll my eyes when they brag about the preciousness of the pops and the balancing of the needle and quality of the sound, but I’m jealous. They have a machine that does just one thing, plays records.

Meanwhile, a friend is worried about her dog, who has become very clingy and affectionate after ten years of mellow reserve. He’s eating blinds while she’s gone. He’s sleeping on her socks.

Django is also clingier, though not any more affectionate.
She won’t willingly walk unless both Dave and I go. If it’s only one of us, she keeps trying to turn back.
When we leave the house, she won’t go first. “But isn’t that what they taught us at obedience school, humans go first?” I ask Dave. “Maybe those classes finally paid off.”
“No,” says Dave. “she just wants to make sure we’re all going.”
She follows us around the house wearily, like, “We just got comfy in the office, why the hell are we going down the basement?”

What I can’t figure out is why, with music so much more easily accessible–
on my computer
on my phone,
through the stereo if AppleTV or my Remote app is currently letting me access my iTunes library, which is about 50 percent of the time, averaging out the times it lets me in at first try,
lets me in after I turn on sharing AGAIN,
lets me in after I go up and open iTunes or just remind iTunes that it is indeed open,
and the times it works for a while, then cuts out in the middle of a song like it suddenly remembers it had a roast in the oven,

–I don’t listen to music as much as I used to. These days, if I want to listen to music that sounds good, I generally just turn on Pandora through Roku, because:
it will play through the house speakers.
I can listen to the sort of music I’m in the mood for
(Americana Radio, Rain Dogs Radio, Blossom Dearie Radio)

…though not a specific song or album. If I want a specific musical experience, and the song or album happens to be
in the subset of my iTunes library that’s currently on my phone
or
findable with a Web search that usually turns up at least a YouTube version
I’ll generally just play it there,
turning up the volume and reminding myself that it sounds not that bad for a phone speaker.

Maybe I could solve this with Spotify, which I would then connect to on the Roku, and thereby have infinite choice of artist or album or genre, which would be great, but it would also mean:
the screen of the TV has to be on so I can choose things
(and everyone knows the TV screen sends out hypnotic watch-me rays that fundamentally conflict with the auditory omnipresence of good audio)
and
the sheer abundance of choice at any given moment would result in buffet blindness
–which happens when I go out for brunch and end up with ketchup on my cantaloupe because I put too much stuff on my plate because it was all free, free! for the cost of brunch, so I don’t even know what I’m eating and the omelet is cold–
and
I’d be paying for a service instead of buying albums, so any fantastic music I discovered would become inaccessible as soon as I stopped paying for it.
(What was that band singer song called again? Oh, never mind.)

I thought I was alone in my vague sense of musical dissatisfaction until yesterday, when Dave said, “I miss music.” Then in the car with friends we were group-grocery shopping with because of the coming snow, Sam piped up from the backseat, “Me too! I used to listen to music all the time. And now…”

So now we’re looking at the way media is configured in our home and trying to figure out how to change it without:

Django doesn’t care about music, or cuddling, or laundry. She doesn’t nestle with my dirty socks. She just stands at the top of the basement stairs, waiting for me to finish folding clothes so she can get back to a room with a dog bed in it. 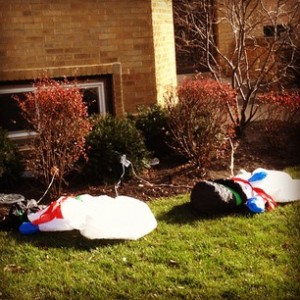 Exhibit B. Filling the humidifier while it’s raining outside.

Exhibit F. The empty laundry basket that’s been sitting in the same spot for a week.

Exhibit I. The sky, right at this moment.

Exhibit K. That piece of fuzz on the blind. Its weightlessness. Its replicating powers. Its almost-lack of color or form. Its polite insistence. Its network of friends.

Exhibit Z. That dream last night. Specifically, the part with the ladder.