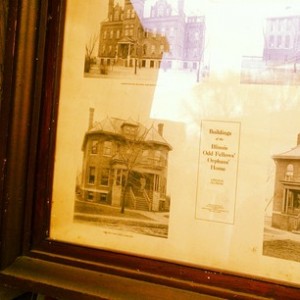 Buildings of the Odd Fellows’ Orphans’ Home, framed, submitted to alley, accepted by me.

I got my favorite rejection of the year in the mail the other day. As a writer, I’m supposed to be used to rejection, but I’m not. I never got rejected from this particular place for that particular piece before, so it’s always happening for the first time.

And as someone who’s done my share of rejecting, I should remember that not everyone’s performance or piece is right for whatever I’m casting or curating, so I should remember it’s not often so much about rejection as it is about incompatibility, but I don’t.

And as my job hunting friends tell me, I should be grateful even for rejections, because someone cared enough to say no, thanks. Apparently the trend in employment these days is, if you don’t hear from us, consider it a no. Thanks. Yeah, I guess, but it still stings. Except for the times when it doesn’t. Like this one.

It wasn’t one of those personalized “Your play is amazing but we don’t have the budget for your time machine set piece” or “The writing is so brilliant even we don’t understand it “ sorts of letters. There wasn’t even a scrawled postscript about how I should send in something else because they liked my voice. It was just a form letter on cheap paper telling me that my play, “Charlie,” wasn’t selected for their ten-minute musical project. Two things stopped me from feeling bad about it, maybe three.

First, the letter said that not only wasn’t “Charlie” selected, but no one’s play was selected. Which made me feel included instead of excluded. I like feeling included, which apparently is okay because that’s part of being human.

Also, the letter advised all us rejects to pay more attention to story, because plot was mostly where these pieces disappointed. It recommended more adaptations. I can take or leave the advice, but at least I have a sense of why they didn’t like my very small story with some big songs (composed by creative wonderbox Charlie – oh, btw, Charlie, we didn’t get in – Hopper).

There’s something lovely about a rejection that reveals just a little of what’s behind the no. It demystifies the whole process in a way that makes me feel less generally inadequate, and more specifically incompatible.

Rejections also feel better when tempered with acceptances. This morning, I got an email with a link to a tiny radio play I wrote, “Go,” which is presented as part of this week’s episode of Chicago Off Book. It’s a smart, fast, funny show that makes me want to go see more theatre. I hope you’ll listen to it—and not just to my 60 seconds of silliness. Arlene Malinowski also has a mini-play in this episode, and there are interviews with Michael Halberstam and Darrell Cox.

Ironically, when something of mine is accepted, I don’t feel a huge rush of artistic triumph. I just think, oh, good, for some reason that worked for them. It boosts my confidence enough to think about sending out more work, and more importantly, it’s the point of the whole endeavor – to share my work, my view, my experiences, with whoever might care to listen.

Like most things I write, both “Charlie” and “Go” are on actual events: one I overheard at a bookstore, and one I saw backstage at a theatre. The more I write, the more I discover specifically what kind of writer I am: an interpreter of the small and forgotten. And I’m proud of it. If you too are someone who auditions, submits, sells, offers yourself parsed out in words or images or knitted hoodies or carved dogs, I hope you’ll keep at it. Because there may be only a few people in this entire universe who really “get” your handmade astrology-themed earbud cozies, but wouldn’t it feel good to connect with them?