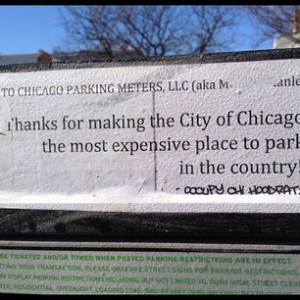 Seeing Judy’s show last night reminded me of Fred’s ‘Fuck cancer’ tee-shirt. A few months before he died, he emailed a picture of himself wearing it. I remember the look in his eyes – that typical Fred look of combined amusement, affection, and a sense of having seen this all before, perhaps a hundred years ago. In the photo he had that same look but it was intensified. Perhaps a thousand years ago.

In Judy’s show, ‘Fuck cancer’ was on a hat. There were photos of hats and tee-shirts you can expect to receive if you get cancer. “Of course they’re fake. My real ones tried to kill me.”

I went to her show after watching another show at Second City, a solo class showcase a friend was in. My friend did a hilarious monolog and song about the exquisite tortures of auditioning. Another guy did a piece about recovering from a stroke. His cane, which he’d been given at the nursing home, was feeling a bit unwanted now that he no longer leaned on it every day. His piano was also feeling left out. Occasionally he still played with his right hand, but he seemed to get too frustrated about his unworking left hand, so there were no more duets with the man’s wife, no more music making long into the night.

Most other pieces were about breakups. One guy’s girlfriend cheated. One woman’s husband strayed permanently. One guy’s boyfriend dumped him in a text. Illness and breakups, those were the themes last night. It was odd how the breakup stories seemed to begin and end with the fact of the breakup, how much it hurt, how sweet revenge could feel, how lonely it was. Whereas the illness stories began with the illness and went on to explore the new reality, new values, new discoveries. On the whole, illness seemed like a more useful experience than breaking up, though of course most of us would choose a breakup over cancer any day.

It’s easy to make fun of solo shows and people do it all the time, but standing on stage alone is an act of faith in more than yourself. It’s an act of faith in human experience, to believe that your slice of it is worthy of a stranger’s time. It’s a sign of faith in community, bringing together a group of people who will be changed simply by being together, facing the stage. When Judy said good night, a woman called out, “My teacher!” and some of us cheered. I thought of my teacher, Fred, and his tee-shirt, and his smile.

During Judy’s show I worried at first that my friends would think it was too depressing, too personal, too detailed. But I heard Johnnie and Paul laugh when Judy brought out her hated cancer socks, which they lived through when Paul had to wear stroke socks. Toots and I exchanged awed looks when Judy sang about the uncanny string of holidays that hosted every one of her cancer and recovery milestones. Afterward, we went out and celebrated our very first evening of all going out together. We made multiple toasts. We were giddy.

2 thoughts on “Acts of faith”