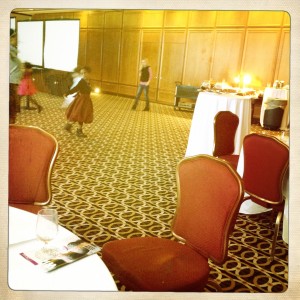 And all the men and women merely crew.

Some observers would think this film shoot was completely under control. The set is perfect: pageant stage with balloons and sparkly ribbons, awards table with assorted trophies and crowns, an oversized check.

In the ballroom next door, a makeup artist is stationed at her battalion of paints, powders, mascara wands, curling irons, straightening irons, brushes, hairpins. At another table, little girls’ dresses are laid out, very pretty. A script lies on the next table, my part highlighted in bright orange.

“I thought this was a play,” she says, which explains why she kept asking where the audience was when the director took us on set a minute ago. I thought she meant the fake audience, the parents and kids who normally would be in the audience, watching the girls dance and pose onstage. The director explained that they’d be shooting her scene from the audience’s point of view so we really didn’t need more than two or three people in the seats.

But now, sitting with her at the table, in the early months of this year of a day when I still think the lines matter, it’s hard to know exactly what she meant. She sounds out the words of my dialog, maybe because they’re glowing with orange.

“That’s a spelling word,” she says, pointing to the word know. I hate to tell her that’s one of my lines, because it’s taken so long just to get to the point of sitting here, which is what I think we need to be doing. Actors review their lines together, right? You run the stuff you’re going to shoot that day, and build some kind of rapport, especially if you’re going to be playing mother and daughter. I’ve already warned her that I’ll be saying some mean things because the mommy in the story is a little crazy. “No way you can make me cry,” she informed me when we met.

“No, you can’t do it,” she laughed, and I thought we were off to a good start.

She loves looking at all the dresses, and loves getting up and running around the ballroom, and taking a cookie from the buffet table, and trying on lipstick. She stands next to me at the table, drinking soda out of a wineglass she found at the bar. “The… car…”

“It’s the part the camera guys use to see where we are.” But actually it isn’t. The action says we’re in a car, but the director has changed it because my co-star arrived three hours late so we don’t have time for the car setup, so we’ll be in a dressing room. “We don’t care about that part because we’ll just be wherever they put us. All we care about is saying the words and telling the story.”

“Can I have this dress?” She’s wearing an adorable black and white dress she calls her Lady Gaga. It’s trimmed with faux fur.

“We don’t care about that part.”

“Well then, which are mine?”

“Just the skinny part in the middle. But not the orange ones. See, all it is, is the mom is telling you what to do, how to do your dance.”

“I know how to dance. I’m good at dancing. Want to see?” She starts dancing, and I get up. I decide I don’t need to worry about the script.

“Yeah, I know you’re good, you’re amazing, but the girl in the story, she keeps forgetting.”

“No, you don’t. But the girl. That’s the whole scene. The mom keeps telling her the steps, and she forgets, because when she does the dance on stage she dances really amazingly, but she misses one step.”

“No, I know, but you’ll just pick one place to miss one. Because then Mommy gets mad.”

She raises her eyebrows at me, like she did when the director first introduced us, and like she did a minute ago when she asked and I told her. But this time, instead of just raising her eyebrows, she stops. “You’re white.”

“Then how can you be my mommy?”

“I mean, in the story. Maybe your pretend daddy is dark and your pretend mommy is…light. I don’t like that word ‘white.’”

The director interrupts, “Hey, want to meet your dad? Your pretend dad? He just got here.” A handsome, incredibly well-dressed man walks up. He’s wearing a three-piece suit, a cravat, a matching pocket handkerchief, and a pair of Dolce & Gabbana glasses. “Darling,” I say, “where have you been?”

He laughs, “It’s been a long time.” Our co-star laughs at us but lets us hug her for a minute. The director says, “This is your daddy in the story.”

“He’s my daddy?” She raises her eyebrows again. So maybe it’s not my color that she’s questioning, it’s just the possibility that anyone other than her dad could be her dad.

“Yep. But he’s not at the pageant. You want to do your dance?”

“Yes!” She runs up onstage and the director follows. “Now remember what we talked about, you do your dance real perfectly, but then there’s just one place where you trip.”

“Oh. Well…” I begin to see why this guy is a good director. He adjusts on the fly.”Okay, maybe you’ll do this one perfectly, how ‘bout that?”

“Yes!” I’ve followed them to my spot just in front of the stage, where crazy mommy is watching from, and she whispers to me, “Where’s the director?”

“It’s his story, that’s why we’re doing these things,” I say.

One thought on “All the world’s a set”