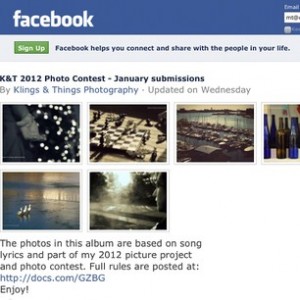 My favorite so far is the window.

“Stick shifts and safety belts
bucket seats have all got to go”
Too literal?

“If you respect me at all
please don’t call” Too pathetic?

I’m choosing a lyric for my weekly submission in Christina’s photography contest.

Maybe? On the page it looks cute and romantic, but the first time I heard it I had to stop my car, I was crying so hard. My uncle George had just died, and I could feel the family falling apart. Polite disagreements over who got which rosary and who deserved keys to his apartment and what it meant that this cousin came to town while that one only called.

A cell phone held to Uncle George’s ear as he lay dying, yes William Faulkner I’m sorry I didn’t pay better attention in American Lit, unconscious in the ICU bed. It’s awkward being the one holding the phone to his ear. My brother is saying his goodbye from Colorado. I’m not sure when to pull the phone away. Uncle George doesn’t respond, can’t respond. He lies still with his eyes closed, his normally lean and leathery face looking puffy and unfamiliar. After a few minutes I hold the phone up to my ear. “…softball games, and that time you came to visit with my dad, man Uncle George, every time I go to that ridge we hiked to…” I put the phone back to his ear.

“This is the way that life is supposed to be
And there’s a reason that you just can’t see
You’ll never be what you’ll never be,” but there never was the one for Uncle George. He was single all his life. My mom thought he might have gone on a date once.

“I went off in the cruel world
Like a gun in a crowded room.” Did I send that one last week? It’s hard to keep track.

I’ve been meaning to talk to Christina about that. I want a dumbed down version of the rules posted right on her page. I know you can send one lyric a week, but when does each week start and end? I know she takes pictures inspired by the lyrics. But either she decides, or visitors to the page vote…Somehow a winning photograph is chosen each month. And the submitter of the winning photo’s lyric gets a print. I want everyone to enter, because I love seeing the photos she’s come up with so far.

And I love the nostalgia factor, the callback to days when songs were front and center in my identity, when I posted lyrics on my dorm room door, to make a point. “You may ask yourself well, how did I get here?”

Another thing I like about running is the excuse to listen to music. Old random mixes on an iPod I’ve got hooked up to a speaker next to the treadmill. I haven’t synched it to iTunes since about 2009, so usually I just pick one of the on-the-go playlists I made years ago and just run to that. Yesterday it was a scramble of Cake and David Wilcox and Blossom Dearie that must have made sense at the time. In retrospect it’s too bad there wasn’t something from Etta James. She’d have done a great “Napoleon.”

Most aren’t fast enough to be workout songs, but also I like to sing as I run. I figure if I can sing, then I’ll be able to chat with a running partner when I start running outside. But also, singing makes my heart feel good. It makes me happy.

As I was running and singing along to “Jesus wrote a blank check” I thought about how singers, good singers, seem to give equal treatment to both intricately constructed lyrics and those that seem like just the easiest next rhyme.

My mom used to worry about Uncle George driving home from the suburbs to his apartment in the city. “Wait ‘til rush hour’s over, George,” she would say when he came to visit.

“But they’re crazy this time of day. They drive so fast.”

“That’s okay. I put my tapes in and turn up the sound. They can honk or pass me, I don’t care.”

My mom would fume after he left. “He’s the only one going 30 on the Eisenhower. Someone’s gonna rear-end him and then he’ll care.” But he always made it home okay. I like to think of him cruising down 290, singing along to whatever he listened to, probably Perry Como or Bing Crosby. I’m glad I was never behind him on the road, because I would have been swearing my head off. But in his world, singing along, he was content.