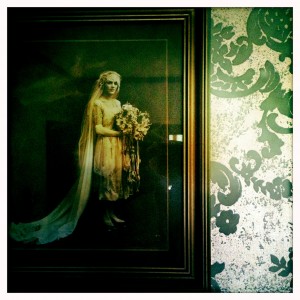 “If I didn’t marry him, it would have been someone else.”

Cousin Gina is in town. Yesterday she came for lunch and we talked a mile a minute like we always do, rushing to catch up before one of us has to leave. I was missing my dad enough to talk to him in the car the other night, and Gina is the answer to an awkwardly asked prayer. “Dad, I miss you. I just miss you. I want to see you. You know? Dad? Hey jerk, I got right of way! Merry effing Christmas to you too.”

Gina’s mother’s mother, Albina, and my father’s father, Jerry, were sister and brother. Whew. While Jerry was still in Italy working up the passage to get to Chicago, 15-year-old Albina met a girl on Taylor street named Mil, and they became best friends. When Albina’s big brother got to town, he liked Mil, too. “Everybody was after him, he was that good-looking,” Grandma would tell me, when I went to visit her and eat Salerno butter cookies. “For some reason he wanted me.”

“Ask? It was understood. After he decided, he would follow me around. He wouldn’t let me talk to nobody else.”

“What if you said no? Don’t you ever think about what might have happened?”

“If I didn’t marry him, so what? It would have been someone else.”

“Then you’re glad it was him?”

Gina and I made a salad and had it with a soup I’d made a few days before. She kept calling me Martha Stewart, having no idea that I’ve always wanted to be someone who makes big batches of soup but have never managed it. I picture us eating soup all week, a quick meal that’s homemade. Finally, this week of all weeks, I made a pot only because I had beautiful leeks that needed using, and it’s been nothing but trouble. I worry about it constantly. Are we going to eat it all before it goes bad? When will it go bad? Three days? Two weeks? Should I warm up just a little each time, or the whole thing so I can boil out the bacteria each time? And what if I’m not in the mood for potato leek? Most of the time I’m in the mood for pad kee mao.

I don’t know what it is about Gina that brings my dad to me. Something in her eyes, and the way she can laugh even when she’s crying. And of course, because some of the same blood flows through our veins. We cried about our parents, just for a second, just when I cracked that my family is falling apart, and talked about bread, houses, Italy, work, writing, her kids, our dogs, aging, soup, figure skating, and I forget what else. Then she left to pick up her brother from the airport, and I went to get my hair cut, go Christmas shopping, and hustle to a Hanukkah party.

There is never enough time to tell Gina everything and ask her everything from a year’s worth of living in different parts of the country, but I got my fix. Thanks Dad, or Santa, or maybe just Gina for making the drive to Chicago. And now she’s got me thinking about Grandma Mil, who knew when to spend six hours in the kitchen, and when to reach for a can of Campbell’s.

Mil was a great cook, but she saved it for special occasions. Savoury fried smelt and garlicky olio uolio on Christmas eve, and other things I can’t spell but can hear her say in her high-pitched voice. She was one of ten kids. When she was four, her parents had their house moved from Taylor to Peoria Street. Mil’s mother wanted the kids to live in a better neighborhood, but also wanted to die in the family’s first American home. Mil always remembered the sight of her house rolling up the street and around the corner. “You don’t forget things like that,” she once told me. “It’s the little things you lose, like who was the youngest.”