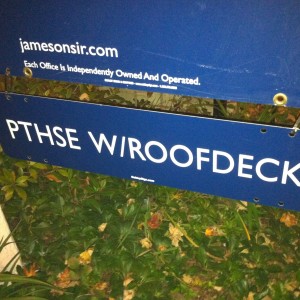 It made more sense after Dave translated.

We’ve eaten out a lot this week. Dave’s dad is in town and he is both a great cook and a lover of fine food. The other night we went to one of his favorites, Les Nomades. Serene lighting, sumptuous appointments (that is, chairs and stuff), and waitstaff who anticipate your every need without calling attention to themselves. Your water glass, your napkin, your every dining comfort IS the most important thing on the planet. And the staff’s comfort is the least. Maybe the point of restaurants like this is to let average people feel what it’s like to have servants—like, royalty-grade servants. You pay the price and you receive the experience.

Maybe that’s why a jacket is required. The Queen doesn’t dine in blue jeans. And there’s the food itself. A thimble-full of inspired parsnip soup,  a salmon appetizer prepared three ways, each better and smaller than the last, a presentation of warm apple tart contrasted with a melon-baller scoop of green apple sorbet. Tiny mouthfuls of gold.

But the experience changes with translation. The first or second time at Les Nomades, I didn’t try to understand, I just ate and drank and sank gratefully into my banquette as they invisibly pulled the table back for me after a trip to the ladies room. Which had a couch! But this time, I thought more about how it all works. Somehow, I couldn’t help analyzing the waiter. He was so formal in his language that I kept thinking he was kidding. “Would the Lady and Gentlemen care to order?” It was sort of like being at a renaissance fair, except I think in that time period Queen ate with her hands. At first, I tried to talk normal, but I am a chameleon and soon I transferred info formalese. “Perhaps a glass of the Springbank?” “Very good, Madame.”

At one point, he bowed in to ask, “Are the Lady and Gentlemen finding the meal to their liking?”

“Very good.” But when he bowed away, I saw him stop at the white serving table and make a small mark on a card. Suddenly I thought, is there a set number of times they have to check in with each table in their station, and the card helps them keep track? Doesn’t he really care? Did he only check with us so he could mark his card? I know, it’s all a business, like any other, and I appreciate that they run this business so well. But for a moment I felt like that king in the play, I think it’s by Ionesco, where he says to his servant, “Don’t you think I know that as soon as I go to bed you blow out the candles and turn on the electric lights?”

And the servant says, “So should I turn on the lights?”

And the king cries, “No. I want my candle. Bring me my candle!”

I started a new playwriting workshop this week. The teacher, Will Dunne, has already made me start thinking about writing plays differently than ever before. He had us do an exercise he called Translations. For the play you’re working on, you identify 12 words or phrases that come up in the play and then translate them into various actions or lines of dialog or images. When we went to see Clybourne Park at the Steppenwolf last night, I thought about what those 12 might be for that play. Racism, civility, institutional ignorance, what’s the point, burying your dead… It made it easier to identify what was so powerful in the play, and also to sense the few ways in which it could have been more powerful – at least to me. What were they? I forget now. Something about what was at stake in Act 2, but something more specific. Ignorance? Yes, I thought if the story of the suicide were more distorted by time, it would have strengthened the idea of ignorance being dangerous, or at least destructive. But maybe that wasn’t one of the playwright’s 12. Or maybe he didn’t have 12. This was only one exercise, in one class.

After the play, Dave translated his Dad’s classic reticence about what he felt like doing into agreement that a bite after the show would be good. At the table, when I was explaining this playwriting exercise, Dave’s dad said, “Music is music. It is what it is. No translation necessary.” That launched a discussion between Dave and his dad over who was the best composer, Bach or Beethoven or Mozart—or more specifically, what made each of them so good.

And that reminded me that at intermission, Dave’s dad stood up and said, “Back then, everyone listened to the same music.” Act One took place in the 50s, and closed with a Bing Crosby song that only Dave’s dad recognized. I was glad to hear him make a voluntary comment, but I almost replied with a disagreement. I remember my dad telling me about how, when he was growing up in the 30s and 40s, he used to have a radio in his room, and late at night, when the signals were stronger, he’d turn it to “the dark side of the dial” either the lower or upper end, I don’t know which. If he tuned it just right, and the night was clear, he could hear Black music, the blues and jazz he couldn’t get in the middle of the dial. But it didn’t seem worth pointing out, because it’s possibly pointless to disagree with a memory. Or maybe that’s why the world is so messed up, I’m not sure.

I don’t know if it’s okay to write “Black music.” We don’t say that anymore. But it’s how my dad described the music he loved. I guess we all pick our battles and our translations. Walking back to the train, I saw a For Sale sign. At first I thought the line at the bottom was the realtor’s name, and I was impressed that someone with such a strikingly foreign name would be selling such a swank property. Turns out it was a swank property, but I was still reading it wrong.