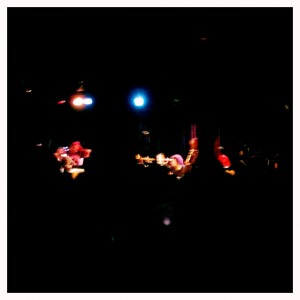 To see through eyes that only see what’s real?

Last night I met up with an old song. A bunch of old songs, really, but I’m picking one at random to make my metaphor work out. I first met the song in junior high. It was in the bedroom of my best friend, whom I don’t have the heart to give an alias to — actually, I like Alias. Alias had not only every Elton John album but every Elton John poster in existence. Her parents let her paint her room any color and one weekend we painted it bright yellow. When it dried, all the posters went up. They covered the walls, album cover art and concert close-ups, Elton in costume singing his heart out behind big tinted glasses.

I was a James Taylor fan myself, with pretensions to the Allman Brothers, although (or because) they were forbidden to me by my brother. “They are the greatest band,” he said, “If you listen to them you will ruin them.” Our family was serious about music. In addition to the Allman Brothers brother, there was the folk music brother who took me to see Steve Goodman and John Prine, and the Todd Rundgren brother who rudely turned off “Sweet Baby James” to play “Hello It’s Me.” And there was Dad, who stopped me as I passed through the dining room so he could put his big headphones over my ears and introduce me to Stan Getz and Modern Jazz Quartet.

But at Alias’s house, where she had older sisters instead of older brothers, Elton John was the only thing on the turntable. Alias had one of those plastic arms on her stereo so you could stack multiple records and they’d drop one by one. When I slept over, she’d load it up with Goodbye Yellow Brick Road and Madman and Honky Chateau and Captain Fantastic. She kept the volume low so we could listen all night, softly singing along, drifting off, waking up to talk about whatever boys we liked or careers we wanted or countries we’d decided to move to, then drifting off again.

Even at low volume, the opening of “Grey Seal” demanded attention. If I was asleep, those piano chords would wake me. I couldn’t totally respect a song that used the same word twice in a key line, but I loved it for Alias’s sake. She was my first best friend whom I’d chosen, not just grown up next door to, and back then that seemed more important than it ended up being. We’d do daring things, like go to the mall and ask people whose pants were too short, “Um, what time is the flood?” We’d mosey into the local Hallmark store and switch the cards around so that when someone bought one and got it home, it wouldn’t fit into the envelope. Yep, we were rebels.

After junior high, the song and I lost touch. He rocked ever larger arenas and I got into theatre. Alias and I remained friends for years, up until I got divorced and she stopped taking my calls. I think I broke some kind of a pact, or maybe I got too self-obsessed, or maybe we just had nothing left in common. We ran into each other at a reunion a few years ago, and all was polite catching up.

My reunion with the song was way better. Tributosaurus, a band I’ve wanted to see for years, became Elton John at Martyrs’, a club I’ve known since it was just an idea in the owner’s head. Every time I walk in there, I affectionately remember seeing the stages of construction, the bar going up, the electric going in, the painted tables being layered with clear-coat. I’ve lost touch with the Martyrs’ people, but a musician friend of Dave’s had posted on Facebook that he was playing with Tributosaurus, and that spurred me to get tickets and pass the word to friends.

After an hour of waiting (this being our first Tributosaurus concert, we didn’t know seven o’clock was only when the doors opened), “Grey Seal” opened the show. It sounded about a million times better than the original. The self-importance of the opening riff had new life as breathed through a bunch of consummate musicians who for some reason decided that should be their opening song. And behind that, ten years ago they for some reason decided to outdo the cover band idea, to play in a way that forces rock critics to find new ways to define cover bands so that they won’t be embarrassed by how much they love these guys. And after it, they played absolutely faithfully enough to acknowledge the most fleeting nuances of songs I thought I’d forgotten, yet also with just enough detachment to allow me to sing along with ironic abandon. By taking the music very seriously and themselves not seriously at all, they have found a sweet spot that is theirs alone. Or heck, maybe this is what all cover bands do. Tributosaurus is my first.

Sometimes I’m scared by how many birthdays I’ve had. They come faster and faster, and there’s so much to observe and so little time to meet all those goals Alias and I set long ago. Maybe she’s met hers. I hope so. But at times like this I just feel grateful to be old enough for memories to connect from there to here, like copper pipes routed and rerouted through walls that have been built and moved and demo’d and rebuilt, so that when water comes out of the spout I want to shake the glass and say, “Do you have any idea what it took to fill you?” I kind of never need to hear “Grey Seal” ever again. That double use of the word “see” still bugs me. But I loved meeting up with it again, and all its friends. Next month Tributosaurus becomes Queen, a band I have no nostalgic connection to. But if they’re not sold out I’d like to go back, to walk into Martyrs’ and remember when they were still figuring out how to wire the stage, and to see if the sweet spot will accommodate someone who didn’t even like the original music.

5 thoughts on “Meeting up with an old song”